Skip to content
02/03/2019
1533
FOR the homeless, it was a ­little victory that will make life easier; for councils, it’s likely to prove to be a giant headache.

In a Supreme Court judgment Lance Priestley, who has been living on the streets of Sydney since 1992, has been cleared of disobeying a no-camping notice in Martin Place in the city, effectively rendering invalid hundreds of signs meant to deter backpackers from using public spaces as makeshift campsites.

It has raised doubts about seven other Local Court prosecutions against people who allegedly disobeyed the signs. 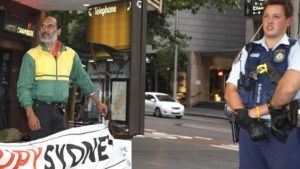 Police charged Mr Priestley when they saw him sleeping in Martin Place between February 1 and 3 last year.

A Local Court hearing in May was told Mr Priestley was taking part in the Occupy Sydney protest.

In CCTV footage shown to the court, Mr Priestley “appeared” to be asleep in his sleeping bag “at times”, but was also observed sitting or standing.

The court ruled Mr Priestley had not disobeyed the sign because he had moved around throughout the night.

“The defendant would have left the area to go to Wynyard to take blankets to a food van and to get a cup of coffee,” the court heard.

The court heard police had noted Mr Priestley to be wearing the same clothes over the three days, although on the second morning he was also wearing “a red raincoat”.

The charges, which had fines up to $550, were dismissed.

The Director of Public Prosecutions took over the case and appealed unsuccessfully.

Supreme Court Justice ­Michael Adams said the case was not the appropriate vehicle to test the boundaries of the notices.

Mr Priestley’s barrister, Jason Donnelly, said: “The effect of the Priestley judgments has arguably far more reaching implications — the idea that, like Mr Priestley, other homeless people cannot be found guilty for having stayed overnight in a public place.”

By LINDA SILMALIS, The Sunday Telegraph. See the actual article.